The Weber Sisters is rooted in Mozart’s life story and includes music inspired by Aloysia, Konstanze and Josepha Weber, three soprano sisters whom Mozart first met in the German city of Mannheim in 1777, when he was 21. Though he initially fell in love with Aloysia, who went on to become a celebr

The Weber Sisters is rooted in Mozart’s life story and includes music inspired by Aloysia, Konstanze and Josepha Weber, three soprano sisters whom Mozart first met in the German city of Mannheim in 1777, when he was 21. Though he initially fell in love with Aloysia, who went on to become a celebrated diva, it was Konstanze who became his wife; she outlived him by nearly 50 years and did much to sustain and build his reputation after his death.

The programme comprises songs, operatic and concert arias and orchestral numbers, and Sabine Devieilhe’s interpretations are typified by beauty of tone, a penetrating sense of drama and a scrupulous respect for the score and the text. Three of the highlights are: the concert aria ‘Popoli di Tessaglia’ – written for Aloysia – which rises to spectacular heights (specifically, the G two-and-a-half octaves above middle C); the sublime ‘Et incarnatus est’ from the C minor Mass – premiered in Salzburg by Konstanze, and ‘Der Hölle Rache’, written for Josepha as the second fireworks-filled aria of the Queen of the Night in Die Zauberflöte, a role that has brought triumphs for Sabine Devieilhe at the opera houses of Lyon and Paris. Her colleagues on this album are the Ensemble Pygmalion, the keyboard player Arnaud de Pasquale and the conductor Raphaël Pichon.

"Launched by a fizzing account of the overture to the Paris ballet Les petits riens, the programme centres around three magnificent showpiece arias for Aloysia, famed both for her expressive cantabile and her coloratura prowess. Among her specialities were sustained pianissimo high notes; and I can’t imagine they were more delicately floated than they are by Sabine Devieilhe, a lyric coloratura who combines a pure, sweet timbre and dazzling virtuosity... In one of her signature roles, Devieilhe despatches the Queen’s ‘Der Hölle Rache’ with terrific pizzazz, her poise in alt even enabling her to shade the high-wire coloratura at will." - Gramophone

"Sabine makes no distinction between high art and low, giving as much beauty and dedication to the Queen of the Night's great 'Hölle Rache' aria from Magic Flute as she does to 'Twinkle, Twinkle Little Star' ('Ah! vous dirai-je, maman') ... Classical music needs much more of this." - Sinfini Album of the Week 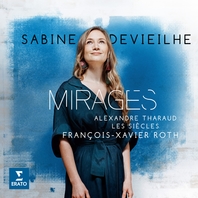