Italian-born, Maestro Abbado studied piano, composition and conducting. He made his debut as one of the youngest musical directors in Milan, following directorships with the London Symphony Orchestra and the Vienna Philharmonic.

In 1989 Abbado was voted the successor of Herbert von Karajan at The Berlin Philharmonic. Despite a diagnosis of cancer he maintained his role as the principal conductor until 2002.

Beside his vast recording catalogue, which includes the acclaimed Verdi Requiem and Mozart's Flute and Clarinet Concertos with Emmanuel Pahud and Sabine Meyer, he was deeply committed to New Music collaborating with the great composers of the 21st Century.

To find more about his life and his recorded works, click here.

Abbado first conducted the Berlin Philharmonic in 1966, and an important artistic relationship began which resulted in the orchestra electing him their Principal Conductor and their fifth Artistic Advisor in 1989. 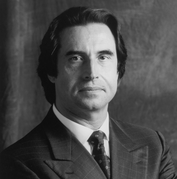