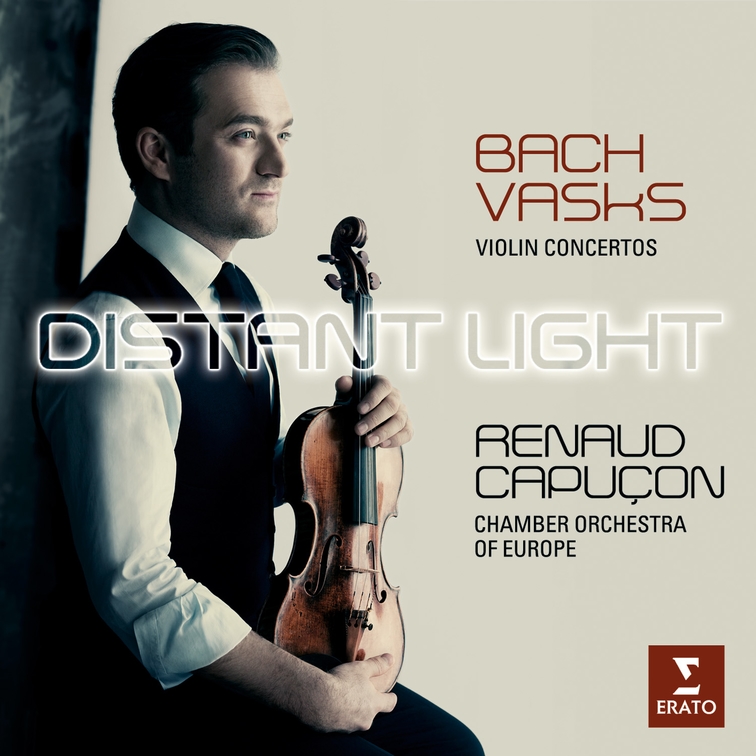 Renaud Capuçon’s first recording as both soloist and conductor is also his first recording with the Chamber Orchestra of Europe. He has chosen to juxtapose Bach’s violin concertos in A minor and E major with a haunting concerto written more than 350 years later: Tala gaisma (Distant Light) by con

Renaud Capuçon’s first recording as both soloist and conductor is also his first recording with the Chamber Orchestra of Europe. He has chosen to juxtapose Bach’s violin concertos in A minor and E major with a haunting concerto written more than 350 years later: Tala gaisma (Distant Light) by contemporary Latvian composer Peteris Vasks.

This programme is as intriguing as it is unexpected. Capuçon – who points out that the Bach A minor was the first concerto he ever played – had considered the more conventional complement of Bach’s Double Violin Concerto; but he settled on Distant Light, a work which, as he says, “I fell in love with as soon as I discovered it”. He decided to “put together two different worlds, Bach’s and Vask’s ... Their music does, however share a purity ... it rises up from a source. When you play it, you don’t get tired … It is healing music, feeding you and giving you energy.”

It is perhaps no coincidence that Peteris Vasks has himself said: “My intention is to provide food for the soul and this is what I preach in my works ... Most people today no longer possess beliefs, love and ideals. The spiritual dimension has been lost.”  Vasks was born in 1946, a year before his fellow Latvian, Gidon Kremer, the dedicatee of Distant Light, which was first heard in 1997 at the Salzburg Festival, performed by Kremer and his then newly-founded ensemble Kremerata Baltica, comprising young players from Latvia, Estonia and Lithuania.

In his music, Vasks often draws on the phenomena of nature – here, twinkling stars in the night sky – and embeds elements of Latvian folk music in a modern idiom. The concerto was stimulated both by the composer’s own memories and Kremer’s German-language autobiography Kindheitsspiltter (Splinters of Childhood). Constructed as a single movement in eleven sections and characterised by contrasting moods, it is fundamentally tonal and often contemplative, inhabiting an aesthetic and spiritual world akin to that of composers such as Arvo Pärt, John Tavener and Henryk Górecki.

Renaud Capuçon describes the Chamber Orchestra of Europe as “an amazing orchestra, with extraordinary  concentration and focus. Within a few seconds of starting to play, we were all sharing the same spirit.” He was also delighted to have, as he said, “the luxury of a leading harpsichordist”, the French player Céline Frisch, to provide the continuo.

“Directing the orchestra from the violin, I have a different and wider set of responsibilities. Rather than getting caught up in the detail of the solo part, it’s up to me to drive the whole session. By taking on the extra role, I gain a better view of the whole musical picture. But with this orchestra, the experience is like playing chamber music, with players around the ensemble contributing their opinions as the recording session progresses. It’s all very organic.”