“Her electrifying intensity and deep involvement with the emotional narrative of each piece makes an indelible impact and feels like a throwback to a golden age when making music felt like an act of celebration. ....... d’Alba’s hypnotic performance is a triumph of interpretative incandescence as

“Her electrifying intensity and deep involvement with the emotional narrative of each piece makes an indelible impact and feels like a throwback to a golden age when making music felt like an act of celebration. ....... d’Alba’s hypnotic performance is a triumph of interpretative incandescence as she weaves in and out of the music’s surging textures.” (Julian Haylock, The Strad, December 2011)

The young Swiss soloist Rachel Kolly d'Alba is considered the most talented Swiss violinist of her generation. Her quality of vibrato is compared to past great violinists with her fire, temperament and musicianship adding colour and life to her playing. She has won every major Swiss award and at the 2005 Fifth International Competition "Julio Cardona" won 1st Prize as well as Prize for Best Interpretation of a Contemporary Work. She is increasingly recognised in and beyond Europe.

“In Bernstein’s Serenade the young violinist Rachel Kolly D’Alba drew every possible lyrical quality from a cerebral and a slightly complex score with a sound rich in colours and expressive intensity. It was a wonderful performance greeted by huge applause...” (Giuseppe Rossi – Quotidiano Nazionale, November 2012).

In recital she plays with duo partner Christian Chamorel at festivals in Gstaad, Schleswig Holstein, Menton, Buenos Aires and Flanders. For her US debut at the Chicago International Beethoven Festival, September 2012, Alan G. Artner in the Chicago Tribune wrote: “Swiss violinist Rachel Kolly d'Alba made a sensational Chicago debut .... Kolly d'Alba gave an impassioned reading, seductive in tone and visionary in spirit. She made of it Art Nouveau architecture for the ear, a thrilling achievement.”

Rachel Kolly d’Alba records for Warner Classics. Her first release - "Passion Ysaÿe" - received huge praise from international press and next CD, "French Impressions", with orchestras conducted by Jean-Jacques Kantorow and John Axelrod in music by Saint-Saëns, Chausson, Ravel and Ysaÿe was similarly reviewed “..... a marvellous recording confirming the class of its main protagonist. ..... she travels through them with impeccable taste and plenty of technique to make them hers, with a spontaneity that comes from ease and grace.” (March 2012 / Claire Vaquero Williams, “Scherzo”) winning Pizzicato’s Supersonic Award 2011 and voted Best Recording of the Year in the “Concerto” category at the International Classical Music Award (ICMA) 2012 Ceremony in Nantes. Her new recording, “American Serenade”, features Gershwin, Bernstein and Waxman with continuing support from conductor John Axelrod and L’Orchestre National des Pays de la Loire. Released in October 2012 was rated “Supersonic” by Pizzicato Magazine in November 2012 and nominated for the same ICMA award in 2013 (“ ... d’Alba’s playing consistently affords a sort of sensuous pleasure in and of itself, both tonally and technically. Robert Maxham - Fanfare, May ’13).

Rachel Kolly d’Alba received her diploma from Lausanne Conservatoire when she was 15. She continued to study in the class of Igor Ozim graduating as a soloist, continuing her studies with others including Franco Gulli, Ivry Gitlis, Boris Kushnir, Hansheinz Schneeberger and Thomas Kakuska. Her studies are on-going in contemporary music, analysis and composition. She is a devoted mother and recently became an Ambassador for Handicap International with her first work for the charity being in Cambodia. Since April 2011 Rachel has played a 1732 Stradivarius. 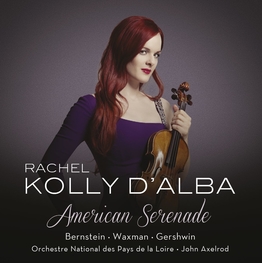 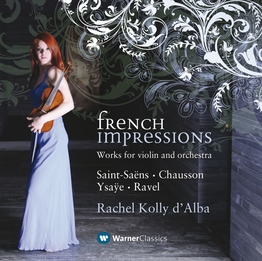 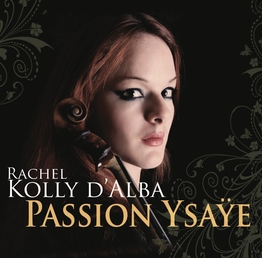