On the evening of 15th April 2019, the world was shocked and saddened when a huge fire swept through the Cathedral of Notre-Dame in Paris. Consecrated in the 12th century, the magnificent Gothic church remains an enduring symbol of France and one of the great cultural treasures of humanity.

The origins of the cathedral’s choir school, Maîtrise Notre-Dame de Paris, also go back more than 800 years. Though the singers’ performing home is currently off limits as it undergoes restoration, they continue to make a lively contribution to musical life in the French capital, performing in churches and theatres. They also tour, both in France and internationally, with a visit to five US states in Spring 2020.

The Maîtrise, which encompasses five different choral ensembles, offers training and performance opportunities to talented children, teenagers and adults. In addition, the cathedral hosts a group of professional singers, the Ensemble vocal de Notre-Dame de Paris, which also features on Cathédrale d’émotions. The recordings on the album, made between 2012 and 2018, are conducted by Henri Chalet, director of the Maîtrise, and by Sylvain Dieudonné and Lionel Sow, who have also held senior posts at the choir school. The majority of the tracks were recorded in Notre-Dame itself.

Cathédrale d’émotions spans the entire history of the Cathedral of Notre-Dame. It ranges from a song by Gautier de Coincy, a troubadour (Trouvère) born in the 1170s who sang the praises of the Virgin Mary to secular melodies, to the Magnificat by Jean-Charles Gandrille. Born in 1982, Gandrille is active as both an organist and a composer, and his 11-movement setting of the Virgin Mary’s canticle was premiered at Notre-Dame in 2016. (As it happens, a work by Gandrille was the last polyphonic music to be heard in the cathedral the day before the catastrophic fire in 2019.)

Among the other items on the album are: 13th century plainchant; Christmas songs written or arranged by three British composers active in the 20th century – Gustav Holst (1874-1934), William Mathias (1934-1992) and John Rutter (b.1945); a responsorial chant by the American composer Morten Lauridsen (b.1943); ‘Veni Sancte Spiritus’ by another French organist-composer, Yves Castagnet (b.1964), and an item from the Vêpres de la Vierge, inspired by Monteverdi’s sumptuous setting of the Vespers, which Philippe Hersant (b.1948) wrote to mark Notre-Dame’s 850th anniversary in 2013.  He conceived his score to showcase not just the choir, but both of the cathedral’s organs. Miraculously, its principal organ – built in the 19th century by the celebrated Cavaillé-Coll and, with some 8000 pipes, the largest instrument in France – survived the conflagration in 2019.

While the world looks forward to seeing Notre-Dame restored to its familiar physical glory, it can experience its musical joys through Cathédrale d’émotions. 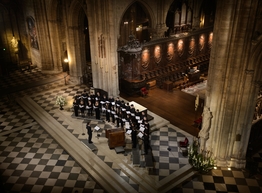 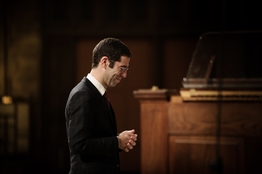 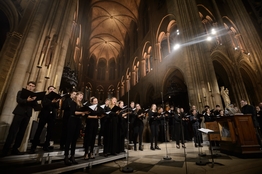