Andrew Watkinson and Ralph de Souza Violins Garfield Jackson Viola, David Waterman 'Cello ‘It is not only the brilliance, intensity and coherence of their interpretation which engages and impresses the listener, but also the
Andrew Watkinson and Ralph de Souza Violins Garfield Jackson Viola, David Waterman 'Cello ‘It is not only the brilliance, intensity and coherence of their interpretation which engages and impresses the listener, but also their absolutely individual rhythmic, vibrant and thoughtful approach.’ Frankfurter Allgemeine Zeitung
While its thirtieth season was marked by the release of a boxed set of the complete Beethoven string quartets on Warner Classics, The Endellion String Quartet will enter its thirty-fifth year in the 2013-2014 season with the release of a new recording of the three string quartets by Benjamin Britten plus his 3 Divertimenti for String Quartet.  Recently there have also been new commissions of six ‘Quartettini’ from Robin Holloway and a new piece by Roxanna Panufnik and poet Wendy Cope; involvement in Phil Grabsky’s documentary film, ‘In Search of Beethoven’; a DVD of the Quartet playing Beethoven; a series of performances of Haydn’s Seven Last Words incorporating the Endellion’s commission of Andrew Motion’s words written especially for the piece; and concerts throughout the UK, and in Europe, China, Japan and Korea. The Endellion continues its Residency (now 21+ years) at the University of Cambridge, and was involved in special celebratory concerts at the University which recently celebrated its eight hundredth anniversary.
Recent and future engagements include concerts in Eire, Spain, Portugal, Italy, Holland, Mexico, and India. In 2013 the Quartet will have toured the USA and Canada twice. They performed the complete cycle of Beethoven’s quartets in New York’s Metropolitan Museum of Art within the space of ten days. They also performed and coached for the prestigious quartet academy MISQA in Montreal.
Warner Classics recently released further recordings of Schubert and Haydn quartets. The Quartet participated in Phil Grabsky’s film ‘In Search of Haydn’; and gave a performance of the première of Towards The Blue by Thea Musgrave, commissioned by Wigmore Hall for Michael Collins and London Winds to perform with the Endellion String Quartet.
The Endellion is renowned as one of the finest quartets in the world. Over the years, its schedule has included regular tours of North and South America and concerts in Australasia, the Far East, the Middle East, South Africa and every West European country. Everywhere, the Endellion String Quartet ‘sets the audience ablaze’ (Daily Telegraph) and ‘captivates concertgoers with a remarkable rapport, playing to each other with a sense almost of discovery, communicating to the audience on a level of unusual intimacy’ (Guardian).
In Britain, the Endellion String Quartet has appeared at nearly all of the major series and festivals and has broadcast many times on BBC radio and television; it has appeared at the Proms; and it has been featured in the week-long programmes ‘Artist of the Week’ and ‘Artists in Focus’. Its presence in London has been marked by several series both at the Southbank Centre and Wigmore Hall, where the Quartet members were Artistic Directors of several ‘Quartet Plus’ series. They have worked with guest artists including members of the former Amadeus Quartet, Sir Thomas Allen, Joshua Bell, Michael Collins, Steven Isserlis, Mitsuko Uchida and Tabea Zimmermann. In 1996 the Quartet won the Royal Philharmonic Society Award for Best Chamber Ensemble.
In addition to its Cambridge University Residency, the Endellion String Quartet has undertaken three short-term residencies at the Massachusetts Institute of Technology (MIT) in the USA. Since 2004 it has had a Spring Residency at The Venue, Leeds. From 2001 to 2010 it was Associate Quartet of the RNCM; and 2011 saw the start of its position as Visiting Quartet in Association with the Guildhall School of Music and Drama.
The Endellion’s 10CD box set release on Warner Classics of the complete Beethoven quartets and viola quintets (supported by The Stradivari Trust) is notable for including rarely heard works, movements, studies, and fragments for quartet and quintet, as well as Beethoven’s complete early version of Op.18 No.1 and his remarkable quartet arrangement of his Piano Sonata Op.14 No.1. The texts used in these recordings have been prepared by the notable Beethoven scholar and editor, Jonathan Del Mar, in collaboration with the Endellion String Quartet. These texts are gradually being published by Bärenreiter, and include striking restorations of Beethoven’s original notes, harmonies, rhythms, slurring, articulations, and expression marks, using newly available sources.
‘… these superb musicians respond to the dark undertow so characteristic of Beethoven’s quartets as much as the gentle lyricism which invariably breaks through. The rest of this cycle is a mouth-watering prospect.’ Observer (on Beethoven String Quartets Vol.2)
The New Grove Dictionary of Music and Musicians concludes that ‘The Endellion is arguably the finest quartet in Britain, playing with poise, true intonation, excellent balance and a beautiful tone. In music of the Viennese Classical composers it has few challengers but it has won praise in a wide repertory, its Beethoven and Bartók cycles being especially admired.’
Read more 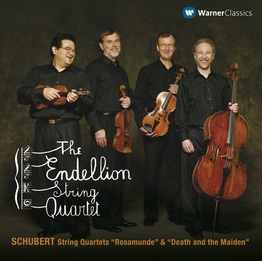 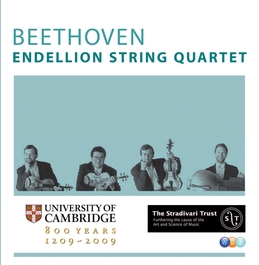