Chanticleer embraces traditional carols, gospel music, plainsong, and composers and arrangers of the present day on their upcoming album

The Christmas concerts of the male-voice ensemble Chanticleer are an institution in the USA. As the San Francisco Chronicle has written, “It’s impossible to resist the voices of Chanticleer.” Over the 42 years since Chanticleer was established in California’s City by the Bay, the 12-man group has become a fixture of the festive season, notably clocking up more than 300 broadcasts each December on America’s National Public Radio. Meanwhile, international tours and recordings have made the name of Chanticleer – derived from a clarion-voiced cockerel in Chaucer’s Canterbury Tales – familiar to audiences all over the world.

Chanticleer’s music director, William Fred Scott, says that: “Christmas for Chanticleer has always been a season of song, an exciting flurry of travel, reconnecting with old friends, and thinking how best to present this timeless story to countless listeners.”

In the words of Gramophone magazine, “Chanticleer, it seems, can sing just about anything”. The characteristically rich and varied programme of Chanticleer sings Christmas, the ensemble’s 8th Christmas album, embraces traditional carols and gospel numbers, plainsong, European and Mexican music of the 16th and 17th centuries, and composers and arrangers of the present day. The featured carols have their roots in the USA, Quebec, German, Spain and South America, and among the composers are Praetorius, Victoria, Hassler, Byrd, Manchicourt and the contemporary Jaakko Mäntyjärvi (from Finland), Steven Sametz and Rosephanye Powell (both from the USA).

When Chanticleer gave its 2019 Christmas concert in New York, Seen and Heard International wrote: “Chanticleer’s impact on the performance of choral music in America is immeasurable ...  When it comes to Christmas choral music, Chanticleer’s impact over the past forty-plus years is really only rivaled in the US by that of Sir David Willcocks and King’s College Cambridge … The ensemble is at ease in two millennia of musical styles, and its sound is about as close to perfection as one can imagine. All this sublimity could be cloying, but the freshness of the repertoire and the solos keep it real. It is amazing that singers who have such individual personal styles and sounds when they step out to sing a solo can create such a wonderful homogenous sound as a group.”

The final work on the 2019 concert programme was Rosephanye Powell’s A Christmas Medley, which features on Chanticleer sings Christmas and was commissioned by Chanticleer in 2017. “Powell created a joyous setting of four songs that started toes tapping,” continued Seen and Heard International, “and ‘Go, Tell It on the Mountain’ almost got the audience clapping. Three soloists shook off their choirboy demeanor and sent their voices soaring through the church. Tenor Matthew Mazzola prompted an outburst of applause before he could finish ‘Rise Up, Shepherd, and Follow’, and Cortez Mitchell’s stunning countertenor was simply magical in ‘Mary Had a Baby’. Tenor Brian Hinman’s mega-watt singing of ‘Come an’ See’ would have been at home in Radio City Music Hall’s Christmas Spectacular.” 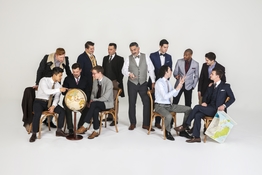