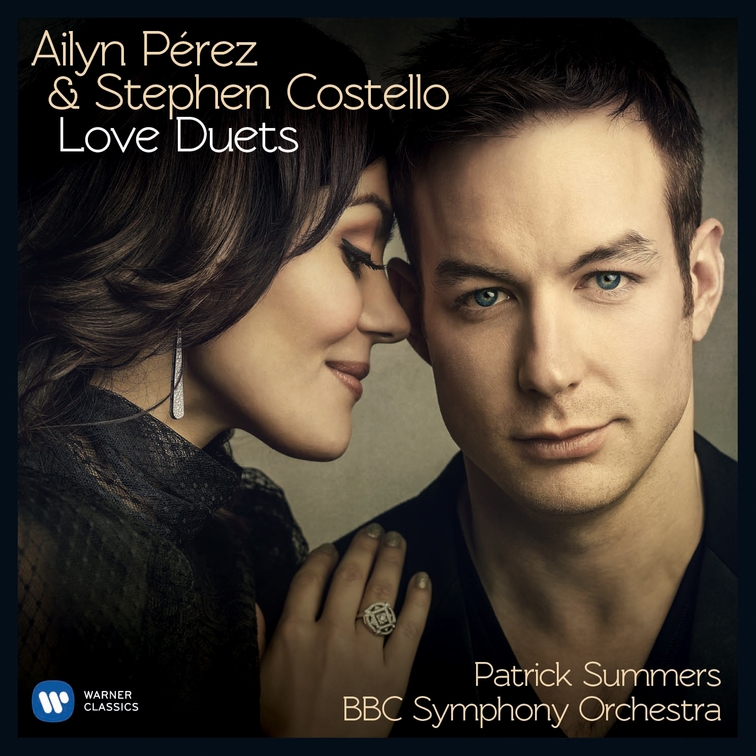 Richard Tucker Award-winners Stephen Costello and Ailyn Pérez – dubbed “America’s fastest-rising husband-and-wife opera stars” (Associated Press) – look forward to releasing their first album together: a recording of romantic love duets by Verdi, Puccini, Bernstein, and others,  recorded with the BBC Symphony Orchestra under Patrick Summers’s leadership in London. The album is slated for release in May 2014, and it will be the couple’s first release as exclusive recording artists for Warner Classics.

Pérez explains: “Given our great love for our art and each other, I’m really looking forward to joining our voices in some of my favourite roles and operatic duets.”

Costello adds: “To be on a label for which so many incredible artists have recorded is a huge honour. I am also honoured to share this album with two great artists – my wife, Ailyn Pérez, and Maestro Patrick Summers. I am truly humbled!”

Described by Vanity Fair as “a match made in verismo heaven,” theirs is a love story that is the stuff of opera itself. The young American soprano and tenor met at Philadelphia’s Academy of Vocal Arts, where an onstage romance in Puccini’s most beloved opera kindled the flames of a real-life passion. This season, Pérez and Costello appear in performance together across the globe, headlining in La traviata in London, Berlin, Hamburg, and San Francisco, and giving concerts in New York, Philadelphia, and San Francisco.

They are the only married couple to boast having two prestigious Richard Tucker Awards on the mantelpiece: Costello took home the “Heisman Trophy of opera” in 2009 and Pérez won in 2012, becoming the first Hispanic singer to do so in the award’s history. When they performed together at the 2012 Richard Tucker Gala, which was broadcast nationally in the U.S. and is still available for on-demand streaming, the New York Times’s Anthony Tommasini admired their “palpable chemistry.”

About Ailyn Pérez
Hailed by the New York Times as “a major soprano” and “a beautiful woman who commands the stage,” Ailyn Pérez is increasingly in demand at the world’s leading opera houses and cultural capitals. Besides receiving the 2012 Richard Tucker Award, she also won the 15th annual Plácido Domingo Award; as Opera News observes, “The phrase ‘an embarrassment of riches’ might have been invented to describe the combination of talents that belong to Ailyn Pérez, … who truly seems to have it all.” In future seasons Pérez looks forward to making her debuts at several top American and international opera houses with such roles as Norina in Don Pasquale, Adina in L’elisir d’amore, Violetta in La traviata, Tatiana in Eugene Onegin, the title role in Manon, Desdemona in Otello, the Countess in Le nozze di Figaro, and Juliette in Roméo et Juliette. She will also take part in the world premiere of a new opera by Jake Heggie.

About Stephen Costello
As the Associated Press observes, Stephen Costello is “a prodigiously gifted singer whose voice makes an immediate impact.” The Philadelphia-born tenor quickly established a reputation as a “first-class talent” (Opera News) after coming to national attention in 2007, when, aged 26, he made his Metropolitan Opera debut in the company’s season-opening performance. Two years later Costello won the prestigious Richard Tucker Award, and he has since appeared at many of the world’s most important opera houses and music festivals, including London’s Royal Opera House, the Deutsche Oper Berlin, the Vienna State Opera, and the Salzburg Festival. In 2010 he created the role of Greenhorn (Ishmael) in the Dallas Opera’s world-premiere production of Jake Heggie and Gene Scheer’s Moby-Dick, prompting Opera magazine to call him “a tenor of ineffable sensitivity, with unfailing elegance in singing and a disconcerting ease.”
Read more