Ukrainian violinist Diana Tishchenko is proving herself to be one of the most exciting artists to emerge in recent years, and has been praised by The Strad for having "...the power to mesmerize the audience with her large gesture and strong personality ." The announcement that she will be a Risin

Ukrainian violinist Diana Tishchenko is proving herself to be one of the most exciting artists to emerge in recent years, and has been praised by The Strad for having "...the power to mesmerize the audience with her large gesture and strong personality ." The announcement that she will be a Rising Star of the European Concert Hall Organisation (ECHO) in the 20/21 season is testament to the high esteem in which she is held by critics and audiences alike. Under the auspices of the highly prestigious Rising Star scheme, Diana will perform in several of the most celebrated concert halls in Europe, including the Philharmonie de Paris, Casa da Musica Porto, Elbphilharmonie Hamburg, Festspielhaus Baden Baden, Concertgebouw Amsterdam, Müpa Budapest, Philharmonie Luxembourg, Sage Gateshead, Philharmonie Cologne, Gulbenkian Foundation Lisbon, Konzerthaus Dortmund, Konserthuset Stockholm, L’Auditori Barcelona, Megaron Athens, and NOSPR Katowice.

On hearing her debut concert with the DSO Berlin at the Berlin Philharmonie under Joshua Weilerstein, German newspaper Der Tagesspiegel gave her a glowing review, writing:
“[Tishchenko] compels the listener even in the first measures of Dmitri Shostakovich’s Violin Concerto No. 1… With a tone of incessant, nuance-rich intensity, she opens our eyes to the inner drama of this piece [...] Simply genius!”

2018 was a momentous year for her containing several highlights.  In November 2018 she was awarded the Grand Prix Jacques Thibaud at the legendary Long-Thibaud-Crespin International Competition in Paris by jury chair Renaud Capuçon, receiving as part of the prize the loan of a 1754 violin by Giovanni Battista Guadagnini from the Anima Music Foundation, and a major label recording with Warner Classics & Erato due for release in autumn 2019.

In July 2018 Diana was invited to the Verbier Festival as a member of the Academy, where she performed Mozart Violin Concerto No.3 with the Verbier Festival Chamber Orchestra, and received lessons and masterclasses from Gábor Takács-Nagy, Mihaela Martin, András Keller and Pinchas Zuckerman.  She has always been an enthusiastic chamber musician, and in May 2018 she was selected to participate in "Chamber Music Connects the World", the renowned biennial celebration at the Kronberg Academy, performing chamber music with artists such as Gidon Kremer, Steven Isserlis and Christian Tetzlaff.

Born in the Crimea, Ukraine in 1990, Diana Tishchenko began to play the violin at the age of six, eventually studying with Tamara Mukhina at the Lysenko Special Music School, Kiev, and with Professor Ulf Wallin at the Hochschule für Musik Hanns Eisler, Berlin. At 18 she became a member – and later the youngest ever concertmaster – of the Gustav Mahler Youth Orchestra, working with Sir Colin Davis, Franz Welser-Möst, Herbert Blomstedt, Antonio Pappano and Daniele Gatti and performing in Europ's most renowned concert venues.  During her studies in Berlin Diana was assistant to Professor Wallin, and a later a docent.  Upon graduating she performed Prokofiev's Violin Concerto No.2 at the Konzerthaus Berlin conducted by Lahav Shani.  Further musical inspiration during her years of study was provided by Boris Kuschnir, Ferenc Rados, Rita Wagner, Saschko Gawriloff, Steven Isserlis and Sir András Schiff. 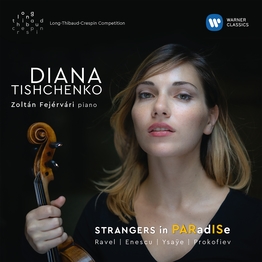