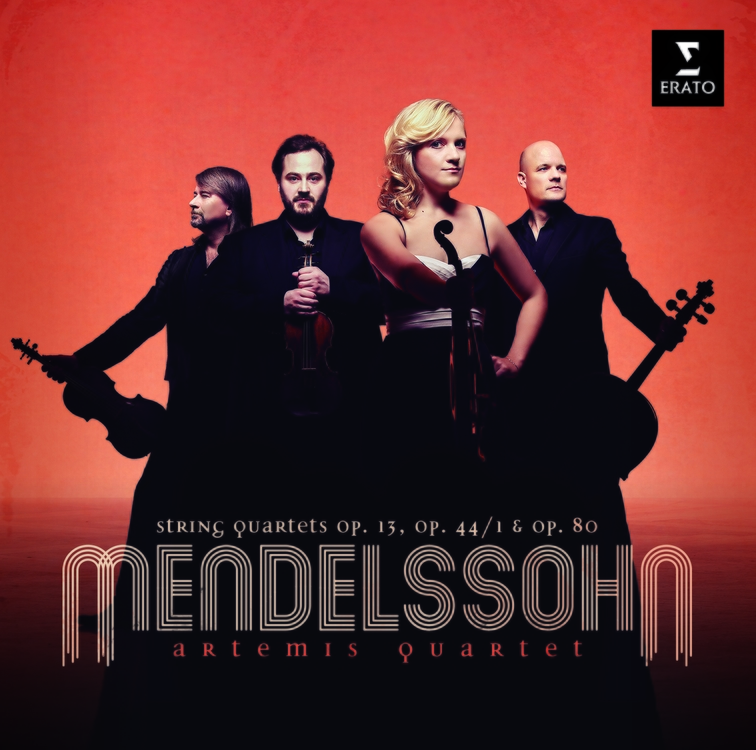 “The Artemis enlarge perceptions, push frontiers and perhaps question received wisdom,” wrote Gramophone of the Artemis Quartet’s 2012 Schubert album. The Berlin-based ensemble now sheds new light on Mendelssohn with these three works from three distinct periods in the composer’s career: his late adolescence, the year before he turned 30, and the final months of his short life, overshadowed by the death of his beloved sister.The quartets of Felix Mendelssohn featured prominently in the Artemis Quartet’s performing schedule for 2012 and 2013. They appeared on programmes with works by Beethoven and Schubert, but also – more unexpectedly – alongside arrangements of Bach by Astor Piazzolla, Argentina’s king of tango, and the Quartet No 2 by his compatriot Alberto Ginastera (1916-1983).These juxtapositions typify the Artemis Quartet’s questing, thought-provoking approach to its repertoire. As Gramophone wrote in its review of the ensemble’s 2012 Schubert album, originally released on Virgin Classics: “The Artemis enlarge perceptions, push frontiers and perhaps question received wisdom.” Classical Music magazine, meanwhile, spoke of “Bold, unflinching readings...that nevertheless offer playing of great delicacy and refinement in quieter passages,” adding that “... with some of the finest Schubert playing on disc...this is urgently recommended.” The Artemis Quartet’s cellist, Eckart Runge, feels that “Mendelssohn is still a misunderstood composer. Some people continue to view him as somehow superficial and lacking in substance. The truth is that he was a huge talent and a huge intellect. For instance, his rediscovery and advocacy of Bach is reflected in his music. His quartets are both highly sophisticated and profoundly eloquent – they have both great emotional directness and that particular depth that characterises many composers’ work in the genre. It is also worth remembering that Mendelssohn holds a special place in cultural history, both Classical and Romantic and uniting both Germany’s Christian heritage – exemplified in the music of Bach – and the Jewish intellectual tradition.” [The composer was the grandson of the Enlightenment philosopher Moses Mendelssohn.] The new CD, containing three of Mendelssohn’s six quartets, brings works from three distinct periods in the composer’s life:  No 2 in A minor, op 13, written in 1827, when he was still a teenager; No 3 in D major, op 44, No 1, from 1838 – by which stage he was already at the peak of his career, and No 6 in A minor, op 80, composed just months before he died at the age of 38 “No 2 and No 6 could both be described as quite radical works, while No 3 is more academic in character, showing his mastery of the form,” explains Eckart Runge. “No 2 is tightly and daringly written, taking inspiration from Beethoven’s op 132; it makes use of techniques like tremolando and recitative, which only became part of the vocabulary of the string quartet with Beethoven’s experimentation in his late works. No 6 is even more radical, though. It was written shortly after the death of Mendelssohn’s beloved sister, Fanny. He concentrates the expression of his grief into 23 minutes of music. It is dense and intensely emotional, with no room for wasted thoughts or decorative elements.”< In Runge’s words, the members of the Artemis Quartet “always try to discover what’s new or modern in whatever we play ... we want to ensure its immediacy.” Since the release of the ensemble’s Schubert CD, there has been a change in its personnel, with Vineta Sareika replacing Natalia Prishepenko as its first violinist in the 2012/13 season. “Change in a quartet’s line-up can bring new inspiration – an opportunity to broaden horizons and introduce fresh ideas – but we also wanted to ensure continuity. When we recruit a new member, we don’t look for a carbon copy of the player who is leaving. We look for the new member to bring something different, but without skewing the essential character of the group. We are not afraid to take risks, which can bring an extra intensity to what we do. The Artemis Quartet does not undertake to perform a huge repertoire, but the way we work on music is highly concentrated. We go very deep.”